So over the weekend, I finally got a lot of housework done.  Cleaning the toilet and mopping the floors?  Not quite.  More like consolidating my home servers and finally getting down to installing linux on my main machine for use as my primary OS.  I first narrowed the list down to Ubuntu 8.04 and Fedora Core 9 because both offer large support communities and the maintenance releases are fairly frequent.

I tried installing Ubuntu first, but ended up having some difficulties while installing the proprietary Nvidia driver.  Then i installed FC9 without a hitch.  Everything ran very smooth and I was even starting to like the yum update manager.  Then I realized that I had left the power cable to the video card unplugged while installing Ubuntu, so just to satiate my curiousity, I reinstalled Ubuntu and PRESTO!  It worked flawlessly.

I’m going to write up an article some time this week that goes into finer granularity concerning my Ubuntu 8.04 install and customization.  Until then, I’m still searching around for linux replacements to accomplish all my common tasks and needs… Just a quick recap of some of today’s more interesting news.

Apple announced the new 3g iphone at WWDC today and kinda surprised a lot of us by confirming a brit rumor that it would sell for $200.  If they can sell an upgraded version now for $200, the profit margin off the first gen iphone (around $600) must have been friggin ridiculous.  While this is great news for everyone who wanted an iphone but didn’t get one because of the exorbitant cost, I’m still wondering where my google phone is!?

Today, Mike Huckabee, former republican presidential candidate got every candidate’s dream in terms of press coverage.  On Saturday, Huckabee saved the life of a fellow republican politician by giving Robert PIttenger (Lt. Gov. of NC) the heimlich in the middle of a GOP convention breakfast.  This is just PR gold.  Hell, next time I’m eating at a convention, seat me next to Huckabee!

If you were in Tokyo, Japan this morning in the Akihabara district (famous for being a mecca to anime and video game fans everywhere), you might have seen a truck driving into a crowd and then someone jumping out of the truck to stab 18 people.  Hmm…  Maybe he was just as angry as I was when Bleach decided to just randomly, and without explanation, go into a filler story arc right when the main story arc was getting really awesome…

this xkcd cartoon perfectly describes the relationship between me and my soul mate. 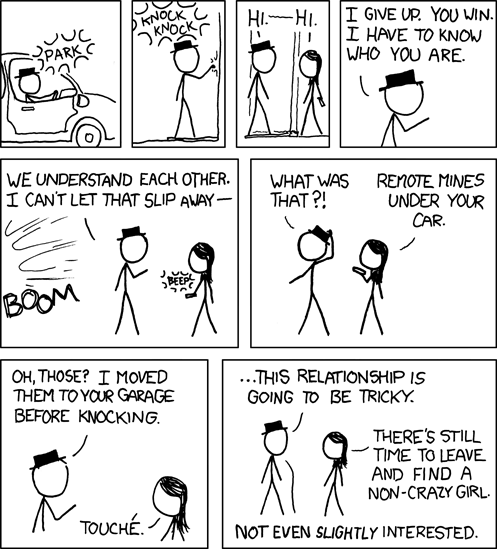 Here’s the video for Radiohead’s All I Need and it is just awesome.  End exploitation and trafficking.

According to this blog source, Comcast, who has already made the news lately with their anti-P2P agenda is on the warpath again.  This time, it is not just against P2P users on its network.  No.  This time, they’ve broadened their target to encompass almost all high bandwidth users.  If you’re reading this and you use Comcast, you’re a sucker.  If you want to get the internet access that you’re fucking paying for, switch to Fios.  Verizon has said that they actually support Comcast’s decisions in regulating the bandwidth, but so far from what I can tell, the Fios service has been untouched.  If Verizon decides to shaft us, we’ll just have to find someone else to get internet access from.  I just don’t want to pay a monthly fee for a crippled service.  Would you buy a sports car with a speed governor on it?  I think not.  Boycott Comcast until they stop interfering with our packets.